They say the only certainties in life are death and taxes. Certainly, when we were younger rock fans, no one guaranteed us that our favorite bands would carry on forever in the face of trial and tragedy. But, at “The Royal Affair Tour” concert held at the Opry House in Nashville, Tennessee on Monday, July 8, 2019 four stellar acts including event creator YES proved that music groups are more closely linked to the lineage of royal families. From time to time crowns are passed on to the next generation who are in the wings ready and waiting to ascend to the forefront. 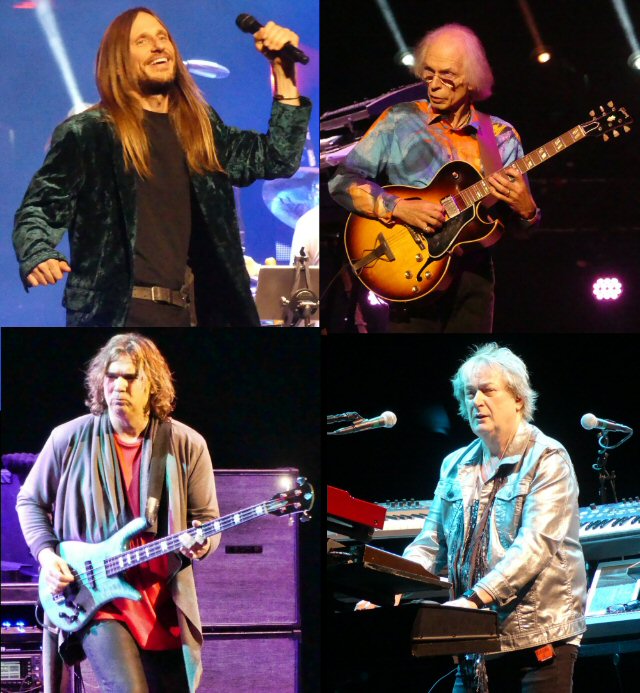 Scenes from The Royal Affair Tour at the Opry House in Nashville.

In 2008, three longtime core members of YES – Steve Howe, Chris Squire and Alan White – set out on their “In The Present” tour with a new singer and keyboard player in tow. At the time, many fans of the essential English prog rock group accepted this configuration because of the presence of 60 percent of what is known as the classic line-up. What choice did they have?

From the stage in Music City guitarist Steve Howe made it a point to point out that YES is now 51 years old and their current version features many new faces switched out from only a decade ago. None of this is said to detract from the music of the four hour extravaganza that was provided by YES, ASIA, John Lodge of the Moody Blues and Carl Palmer’s ELP Experience. It’s told to reveal that the more things change the more they stay relatively the same. All four acts have had to deal with and react to the challenges that living – and dying – bring to their roles as presenters of substantial musical legacies.

“Thanks for the abundance of light,” Steve Howe said nearing the conclusion of the YES headlining slot. The renowned artist seemed to have had some issues with the dark stage and sound kicking back on the platform that regularly serves as the home of the Grand Ole Opry, before adding, “As long as we’re being honest.”

More scenes from The Royal Affair Tour at the Opry House in Nashville.

Still, YES shined a light on some rarer tracks in their 90-minute set. The highlight of the whole show was their 20-minute plus airing of the epic Side #1 from Relayer called “The Gates of Delirium” that Howe said hadn’t been played on stage in over eighteen years. Another rarity in the form of a Richie Havens cover “No Opportunity Necessary, No Experience Needed” from their second record was the first number played in Nashville.

Speaking of experience, lead singer Jon Davison exclaimed that this was his eighth summer touring with the band. He jumped at the chance to join YES when he was invited to do so by the legendary bass player Chris Squire. By all accounts he remains an enthusiastic and natural fit filling in for one of rock’s most beloved frontman – the estranged Jon Anderson – also known as ‘The Voice”.

Squire’s presence is missed but his influence is still on display. Another hand-picked member of the band is Billy Sherwood – the talented bass player, producer and singer/songwriter in his own right. Sherwood remained in the shadows roaming near his rig for most of the night but he replicated the large notes and fluid style of his mentor as best he could. 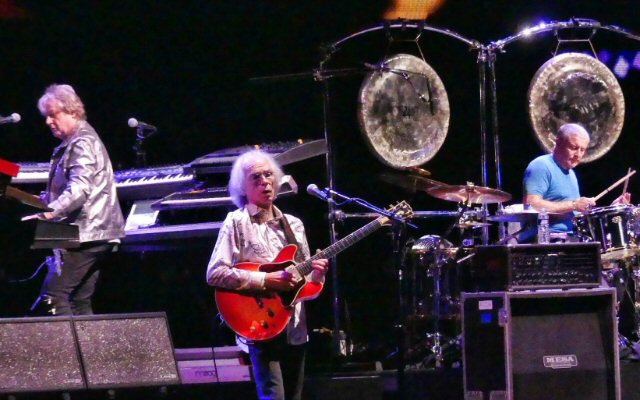 Three quarters of Original ASIA on stage in Music City.

During the encore YES played tribute to John Lennon’s “Imagine” with a slightly progged up take on the classic anthem to peace. Since their longtime drummer Alan White played on the Beatles member’s album he joined his bandmates on stage for this song and a few more. But, White’s place in the group seems to slowly being taken over by the more youthful and energetic Jay Schellen on drums – who himself once spent some time in an ASIA offshoot group.

ASIA in 2019 has expanded to a sometimes five-piece consisting itself of 60 percent of the current YES line-up and the return of Steve Howe. You see how all interbred this really is? A Royal Affair indeed. ASIA was third in line on this tour and featured new blood in the form of former Guns N’ Roses guitarist Ron “Bumblefoot” Thal. In his recently acquired role as frontman for the kings of 80’s AOR, Thal injected a lot of charisma into a set that surprised with “Go” and “Lucky Man” from drummer Carl Palmer’s one-time hit making unit ELP. Howe joined them for their final four must play songs from their amazing self-titled debut “Wildest Dreams”, “Sole Survivor”, “Only Time Will Tell” and “Heat of the Moment”. Seeing three-quarters of the original group on stage made up for the absence of John Wetton who passed away in 2017.

Carl Palmer was another rock legend doing double duty on this night with the responsibility of launching the proceedings as drummer and M.C. for his intriguing Carl Palmer ELP Legacy. Palmer appeared strong, dutiful and diligent as he put his three and sometimes four-piece band to the test. Palmer was one-third of the storied trio Emerson, Lake and Palmer. That group lost any hope of a proper reunion with the 2016 deaths of both Keith Emerson and Greg Lake. 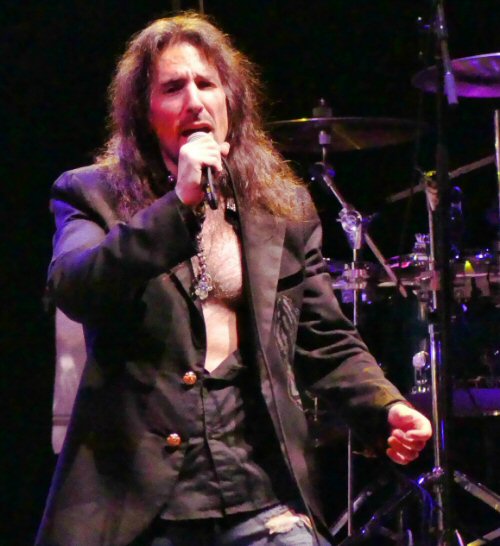 So, the likable precise percussionist has put together a scorching configuration that features Palmer on drums and percussion, guitarist Paul Bielatowicz and fill-in bassist David Pastorius. The famed Emerson keyboard parts are presented via a guitar and effects set-up that worked particularly well in this setting. More curious connections included the flamboyant and prestigious presence of guest vocalist Arthur Brown whose crazy band gave the young Carl Palmer his first big break in America back in the sixties. A smoking version of his classic “Fire” made for a hot start to a long night of music.

Not one of the evening’s act hasn’t felt the sting of funerals or feuds. Consider John Lodge in the second spot. There seems to be some discord in his parent band these days. Where there was once only one Moody Blues Cruise there now seems to be several options to see your favorite “Nights in White Satin” progenitors live at sea. Lodge had a large band with him and won over the faithful with the contemplative “Legend of a Mind” and “Isn’t Life Strange”. But, “Gemini Dream” reminded us that Justin Hayward’s star power was sorely absent on this late-era hit for the British rockers.

Speaking of cruises a late career milestone for YES has been the successful launch of their “Cruise to the Edge” ocean based festivals that support legends and emerging luminaries from the prog rock genre. Details surrounding the 2020 excursion are now released. Cruise to the Edge, the World’s Greatest Progressive Rock Experience, advise fans that they can expect a fresh and exciting lineup, featuring the return of favorites along with several new bands and artists as they sail from Miami, March 27 – April 1, 2020 visiting Harvest Caye, Belize and Roatan, Honduras complete with, of course, two music filled days. YES are well-suited to the sea because when they rock their boat with dozens of their talented friends on board the ups and downs courtesy of the rolling ocean waves do mirror their own sometimes turbulent past. But, they sail on getting ever closer to the edge of even more changes. Who will be on the good ship YES next time out is anyone’s guess. 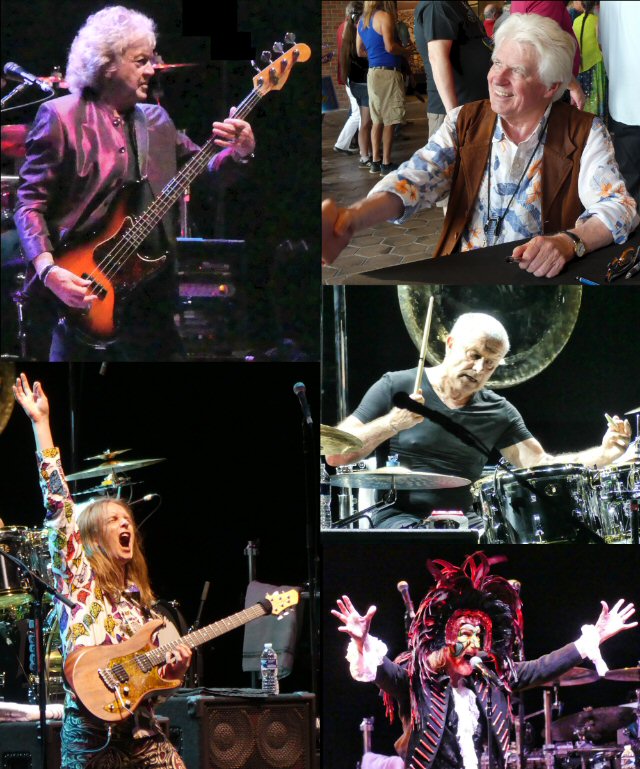 Roger Dean, John Lodge, Arthur Brown and more made this an affair to remember.