Nashville is known as a guitar town and historically the tone most associated with Mid-Tenn has been one that comes with a twang. Considered by many to be a guitar god, Al Di Meola proved that he is still worthy of such a lofty title during his early and late slots at the City Winery in Nashville, Tennessee on June 23, 2019 when he demonstrated that there is much more to the six-stringed instrument than the standard Broadway fare would lead you to believe. The acoustic show entitled “Opus and More” featured vintage and current material from the master whose flavorful music reflects a wide range of influences such as Brazilian, flamenco, jazz, Middle Eastern, rock, tango and world. 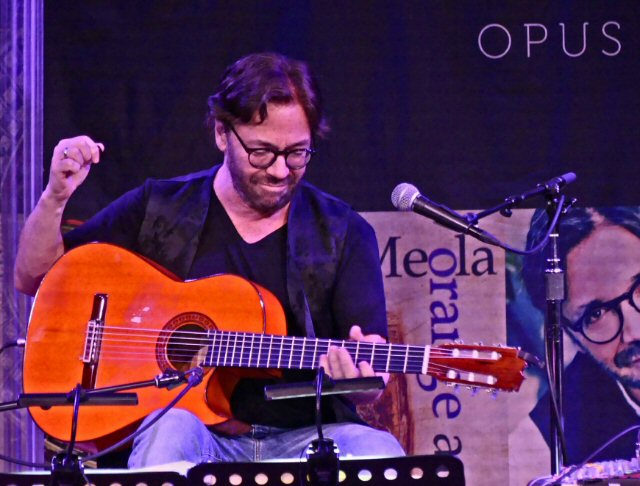 Guitar legend Al Di Meola made a triumphant return to Nashville in 2019.

“Al Di Meola’s ongoing fascination with complex rhythmic syncopation combined with provocative lyrical melodies and sophisticated harmony has been at the heart of his music throughout a celebrated career that has spanned four decades and earned him critical accolades, three gold albums and more than six million in record sales worldwide.” In addition to his stellar solo work, Al has been in a number of well-respected fusion groups such as Return to Forever, the Guitar Trio and the Rite of Strings. Starting in the 1970’s, Di Meola has had a diverse, dynamic calling that still motivates Al to even-higher levels today.

Building on an already impressive catalogue – in 2013 – Di Meola released All Your Life that had the artist who has influenced many looking back at one of the bands that inspired him. “I really credit the Beatles for the reason why I play guitar,” he says. “That was a major catalyst for me to want to learn music, so their impact was pretty strong.” On this pleasing platter, Al put his own creative twist on 14 familiar Beatles tunes.

In 2015, continuing to perfect his craft, Al released Elysium which featured the guitar great layering the lush tones of his nylon string Conde Hermanos acoustic prototype model and a ’71 Les Paul electric (his Return to Forever and Elegant Gypsy axe) in a collection of striking songs that were alluring and animated. “It represents a new composition phase for me, whereby the writing became, in a sense, my therapy during a challenging personal transition in my life,” he said.

Which brings us to 2019. As he took the stage, Al said that it might have been 15 years since he performed in Nashville. Di Meola fronted a talented four-piece of international players. Over the course of two sets the quartet ran through a comprehensive career spanning concert that featured potent prose from Opus including the nuanced “Milonga Noctive”. The flavorful “Frozen In Time” also from Opus was a piece that Al wrote when he hit a chord that he liked. In a few moments, in the early hours of the morning the composition took form to ferment into the expansive instrumental presented at the City Winery.

Al performed a number of Lennon/McCartney tunes with the band adding innovative textures and tones to classics such as “Because” and later “She’s Leaving Home”. Al shared his opinion that the greatest music was written in the 60’s and 70’s. He sort of shrugged as he contemplated contemporary tunes – even jesting that his next number would be rap. Joking aside, Di Meola revealed that he was working on a second Beatles cover album giving his fans something to look forward to. As one would expect, Al presented a diverse palate of speeds and styles spiked with some commentary at the City Winery, thus serving up a very satisfying evening of masterful music from world class players.

The City Winery in Nashville regularly features an array of artists such as such as Al Di Meola. In addition to live music, patrons can enjoy fine food paired with drinks pre-show. Upcoming events at this upscale venue include Wine Pairings, The Spill Canvas, Soul Collective, Guitar Nights and more.