Once again, the power of music proved its potential as a viable source of mobilizing citizens to get out the vote. Grammy-award winner Sheryl Crow led the charge with the help of some of her friends when Nashvillians braved a cool and misty morning on October 20, 2018 to enact their civic duty while rockin’ out to the “Party at the Polls” held at the Ascend Amphitheater along the banks of the historic Cumberland River downtown.

Jay Pounders partied at the polls in Nashville.

Our man on the scene was Jay Pounders – himself a musician ready to begin a new campaign with a brand new band – the Buckskin Stallions. Their name pays homage to a song by the legendary Townes Van Zandt and their line-up contains half of the members who were signed to Geffen Records in their heady heyday as Crossfire Choir. Pounders is a self-proclaimed agitator and a good photog, too, as he snapped the shots for this report.

As politicians prepped their grab for the golden ring of power their was plenty of star power on display during the surprise early morning concert in Music City. Crow was joined by the upcoming and outspoken Maren Morris on the singer’s “Every Day Is a Winding Road”. Sheryl also performed her timely and thematically appropriate “A Change Would Do You Good” that expressed her disdain for the current political reality on the ground.

Billy Ray Cyrus and Jason Isbell also provided memorable musical moments at the WME and Endeavor Impact sponsored event that sought to improve Tennessee’s less than stellar ranking as worst in the country for voter turnout in the last midterm election.

Speaking of the reality on the ground immediately after the concert hundreds of attendees literally pounded the pavement to make their half mile journey to the local polling station to exercise their democratic right to pull the lever for the candidate of their choice. Time will tell if they have another reason to party! 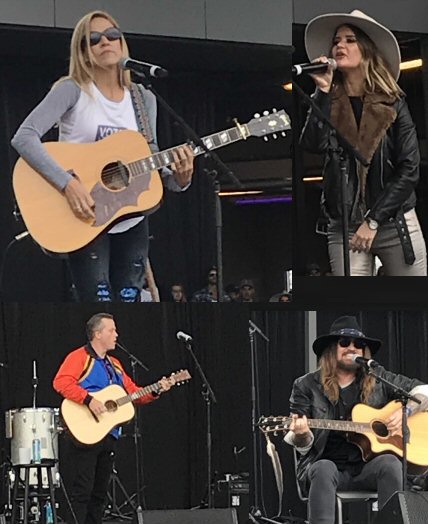 Related Links: For more information on the PARTY AT THE POLLS and the other organizations mentioned please visit the following links — Party at the Polls | Jay Pounders