Weather reports called for a ten percent chance of rain on Saturday, June 18, 2016 in Nashville, Tennessee. Sure enough, just before the much anticipated Monster Jam was set to start at Nissan Stadium the sky opened up and squeezed out a torrent of rain for twenty solid minutes right up until the opening ceremonies at 7 p.m. The inclement weather did nothing to dampen the spirits of the thousands of fans gathered for this historical event in Music City. It did, however, guarantee that this evening’s entertainment would be a marvelous muddy mess.

Soon after a final prep of the course by bulldozers serving as Monster Jam’s own version of a Zamboni the show started with a display of the colors and a tribute to the military servicemen in attendance before a powerful rendition of the “National Anthem” sung by Universal Music Group Nashville recording artist Clare Dunn. That performance was punctuated by a pyrotechnic exclamation point and then the real stars of the show took the field. Over one dozen titans of the Monster Truck circuit roared to life and greeted the crowd with several victory laps.

The allure of oversized tricked-out trucks has its roots in the 1975 creation by a former construction worker from the St. Louis, Missouri area that would eventually be known as Bigfoot. In that year Bob Chandler pieced together the vehicle that would become the standard bearer of a fledgling industry gaining recognition at every truck and tractor pull, car show and promotional event that would have him. In the process he would give birth to a brand-new extreme sport that has really hit the big time. 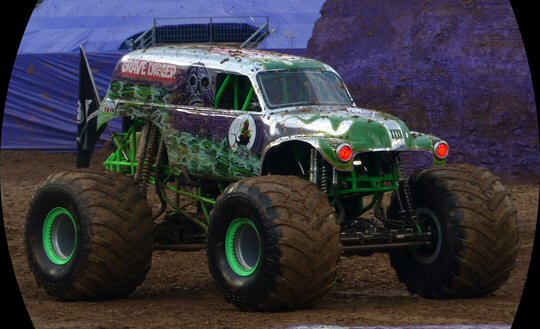 The Monster Jam was broken down into two main parts with the first half comprised of a series of dual races that narrowed the field down into quarter-finals and semi-finals with the last two trucks facing off for the evening’s championship. The muddy field courtesy of the timely downpour led to some extra slick racing as the competitors spewed huge mud patties high into the air. One truck called the “Carolina Crusher” blew its engine at the conclusion of his laps and needed to be towed from the course. Overall, the 12-foot tall 10,000 pound participants proved agile and up to the task of navigating the slick custom-built track.

The winner “Son-Uva Digger” was driven by Ryan Anderson who is having a dominant season in this portion of the event locking up his fourth victory in a row in Music City. He was awarded a championship trophy but in his post race interview made it known that we was going to give it to a fan in the audience so he climbed into the stands and hand-delivered the prize to one lucky lad. In this way, the Monster Jam was a little like Pro Wrestling with fervent showmanship. But, it was also a bit NASCAR and demolition derby as well.

Ryan’s father Dennis is the driver of the one truck that has surpassed Bigfoot in fame and popularity on the Monster Truck circuit. Grave Digger was greeted with enthusiastic cheers from the Nissan Stadium faithful – many of whom were wearing the truck’s image on their T-shirts on this warm spring night in Nashville. 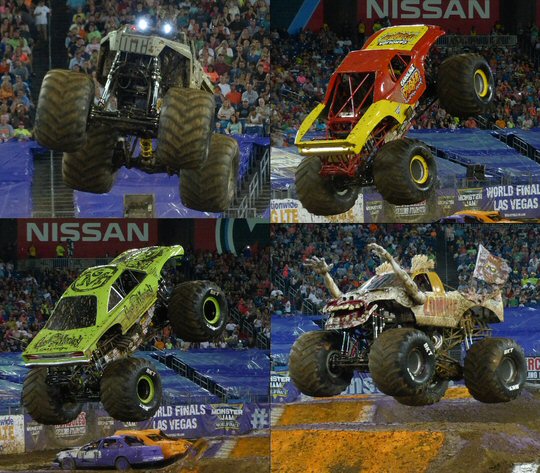 There was a whole lot of jumping at the Monster Jam!

Monster Jam is a live motorsport event tour and television show operated by Feld Entertainment. The series is sanctioned under the umbrella of the United States Hot Rod Association (USHRA) and takes place primarily in the United States. The arena version of the event has played well to Nashville fans as recently as this past January. But, this was the inaugural appearance for the outdoor version and it was a first for the stadium as well. We were told by the evening’s announcer that never before had dirt, and lots of it, been carted on to this field in Tennessee.

After the race those trucks that did not qualify were eligible to participate in a fan-pleasing dual donut battle that displayed the driver’s skills in handling and tested their ability to deliver a stylized spin-filled segment. Fans voted for their favorites after each round that featured high performance, tantalizing tire rotation and rapid revolutions from the trucks. 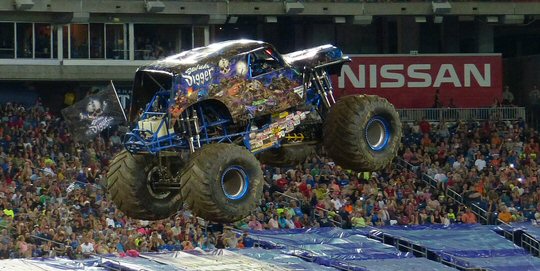 The freestyle portion of the show comprised the second half of Monster Jam and this is where the family-friendly fun really kicked in fueled by lots of high octane rock music from AC/DC and the arena staple, “We Will Rock You” by Queen. The music added energy as the Monster Trucks screamed and leaped as they put themselves in perilous danger. One truck called El Toro Loco featured flashy bull horns that snapped off after a dramatic roll over. Not to be mourned the driver collected them both and delivered them to two fans who went home with prized mementos courtesy of the vehicle’s demise. The Hot Wheels truck was like a child’s toy come to life as it conducted several back-flips off the berm at the back-end of the stadium that was the highlight of the night.

At the conclusion of freestyle showcase several idled trucks littered the sidelines of the stadium but that’s all part of it. Vehicles seemingly destroyed at the Nashville Monster Jam will be expertly rebuilt and ready to jump and jam the next time these monstrous machines roll into a city near you. 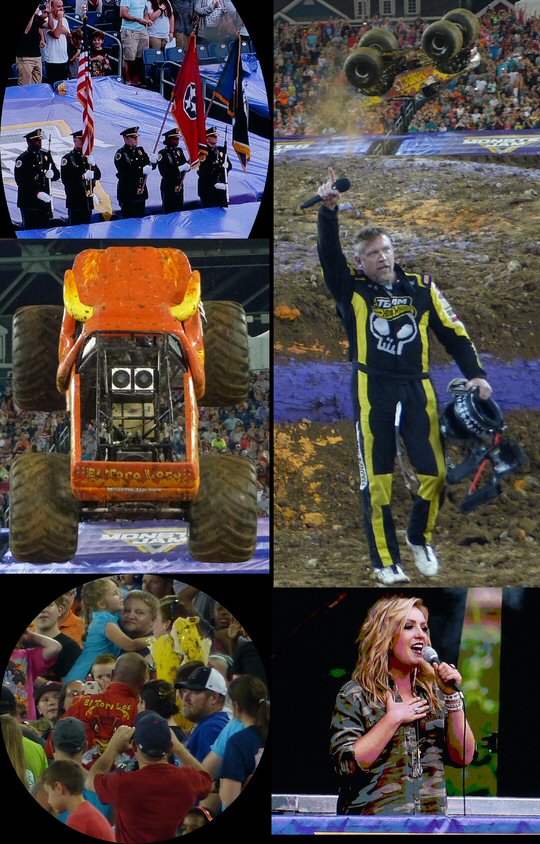 Scenes from the first-ever Monster Jam at Nissan Stadium.

Related Links: For more information on MONSTER JAM and the other organizations mentioned please visit the following links — Monster Jam