Kid Rock was born and raised in Michigan. He achieved fame in Los Angeles and has found a strong following in the state of Tennessee. Just look at the large turnout for his third annual Fish Fry at the Carl Black Chevy Woods Amphitheater in Whites Creek on October 06 and 07, 2017. After two successful years the big backyard party was back with a Ferris wheel, fire pits, games, music, picnic tables and plenty of cold beer. In addition to fried fish there was traditional fair food as well as Nashville specialties such as BBQ and hot chicken. Also on site – on loan from the recently opened Madame Tussauds (Nashville) was Kid Rock’s wax image. Quite a few fans were lined-up to have their picture taken with him.

Nothing fishy about the third annual Kid Rock Fish Fry.

Robert James Ritchie aka Kid Rock is an American rapper, producer, singer, songwriter and actor. This multi-instrumentalist started out in the 1990’s in the hip-hop and rap worlds. In the 2000’s he transitioned into country and rock cementing that change in 2007 with the album Rock n Roll Jesus which featured “All Summer Long” a number one hit that creatively mashed-up “Werewolves of London” and “Sweet Home Alabama”. Recently, Kid documented his new found bliss in the Volunteer State with his latest single “Tennessee Mountain Top”. 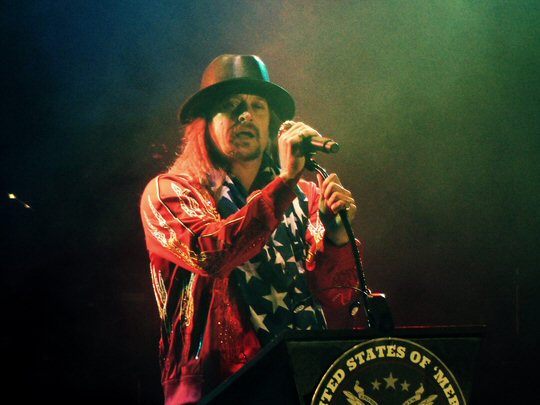 In July of 2017, Kid Rock expressed an interest in running for U.S. Senate in Michigan, against incumbent Democrat Debbie Stabenow. As he was exploring his candidacy Kid Rock started a non-profit organization to encourage voter registration and to get people signed up at his shows. Sure enough we were approached by some friendly folks at the Fish Fry asking if we were registered. 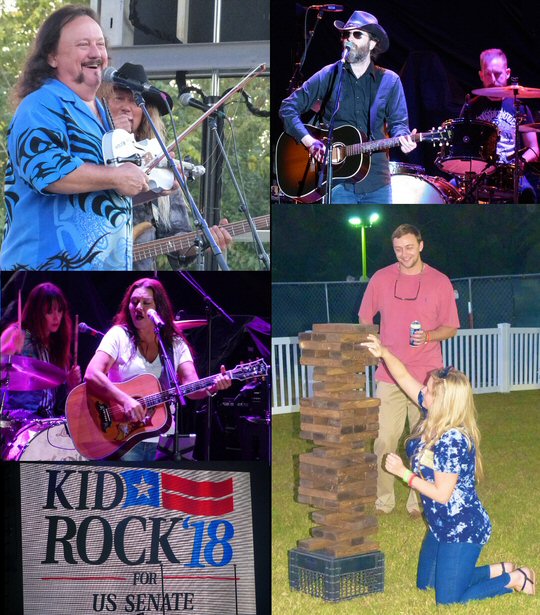 Kid Rock headlined both nights of his Fish Fry. Prior to his explosive sets supporting artists Gretchen Wilson, Wheeler Walker Jr., Tim Watson and more kicked off the festivities. On Friday both Kid Rock and feisty fiddler Tim Watson thanked people for coming out in the wake of the Vegas tragedy that had taken place earlier in the week. Tim also acknowledged folks patience with the required heightened security. Both paid tribute to the passing of rocker Tom Petty with Tim presenting “Last Dance With Mary Jane” and Kid performing a peppy “I Need To Know”. 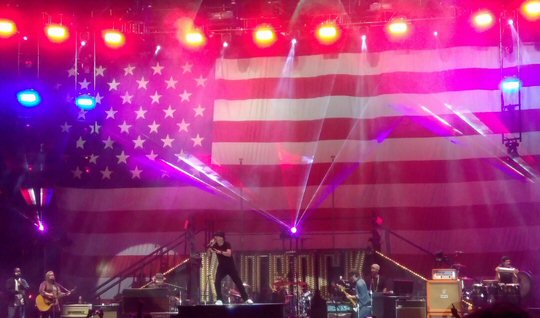 A Kid Rock concert is always a patriotic party.

Kid Rock kicked off his Badass concert with fireworks, flashing lights, pyro, sexy dancers and videos for an over the top “Greatest Show on Earth”. He walked off stage to change into a red suit before taking his position at a podium to proclaim his “Senate Speech”. Depending on what side of the aisle you are on his remarks could have been considered controversial but in the woods of Tennessee it appeared that Kid was preaching to the choir as he finished up declaring that we are still “one nation under God”. Kid may or may not be a politician but he certainly is a showmen who successfully used effects and stage presence to engage fans who were clapping and singing along through much of Kid Rock’s energetic spectacle.

Friday’s show was a career spanning retrospective packed with rapid fire rapping countered by classic rock covers including Rod Stewart’s “Maggie May”, a snippet of the Allmans’ “Midnight Rider” and Kid’s popular “All Summer Long” a much needed carefree tune for these troubled times. Kid Rock showcased his versatility all night by playing guitar, piano and even turntables between singing, working the stage and switching his attire several times . In addition to thanking fans for spending their hard earned money to be there Kid acknowledged the military with the patriotic and potent “Born Free”. “Tennessee Mountain Top” was the highlight of Friday’s encore as the first of two nights of a fun filled Fish Fry came to a satisfying close.

There was ample amounts of sex and sizzle at the Fish Fry.

Prior to Kid Rock’s rousing revue, Gretchen Wilson enthralled the crowd with her bold blends of country and rock. She opened with an animated and appropriate “Here for the Party” followed by “Homewrecker”. Other standouts included the giddy “Grandma’s Gonna Fly” a funny tale about getting her 90 year old Grandma high flowing into “Stacy” with Wilson jesting that everybody knows a crazy Stacy. Gretchen paid tribute to working folks with “Work Hard, Play Harder”. Later, Gretchen demonstrated her vocal prowess on a blazing cover of Heart’s “Barracuda”. Wilson with her talented band quickly returned for an encore that contained a rousing “Redneck Women” but the best moment was when Kid Rock joined them on “Bad Feeling”. 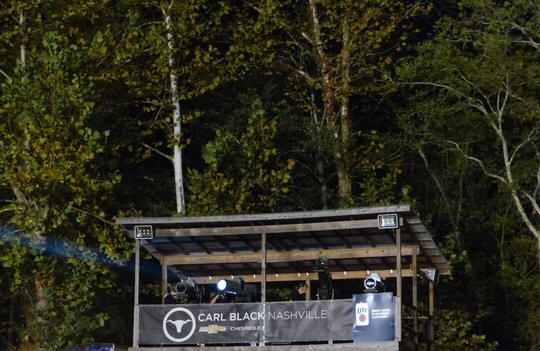 The Carl Black Chevy Woods Amphitheater was truly in the woods.

Hopefully there were no bad feelings at Friday’s Fish Fry as it was a beautiful night featuring food, fun and music in a wooded area only 15 minutes from downtown Nashville. The Carl Black Chevy Woods Amphitheater is part of the Fontanel complex. At one time the Mansion on the expansive Fontanel grounds was owned by country music megastar Barbara Mandrell. In addition to her home which is open for tours Fontanel features an inn, shops, a restaurant, a winery and a distillery. There are also trails to explore. The Fontanel complex is available for weddings, elegant dinner parties, corporate events, outdoor festivals, romantic getaways and family shindigs. Throughout the year the complex host concerts and in the month of October The Glow experience will feature over 5,000 jack o’ lanterns in a family friendly environment.