Brian and Sally Oxley are not your typical music fans. They both grew up in Asia during their formative years as children of Christian missionaries. They were unfamiliar with the young artist who in time would be crowned “The King of Rock and Roll”. The couple’s main focus has always been the King of Kings but in recent years they have taken notice of a number of musical icons with roots in the state of Tennessee. Brian and Sally first became interested in Johnny Cash when they realized that Johnny’s story was one of redemption. They found a connection between Francis Thompson’s poem “The Hound Of Heaven” and Cash’s spiritual journey. Elvis also led a life touched by faith. Interestingly, Elvis was nominated fourteen times for Grammy Awards winning two for Best Gospel Records.

Only a few years ago the Oxleys did not know much about Johnny or Elvis but today the two have become informed collectors and fans. In 2016, they purchased Cash’s farm and a general store in Bon Aqua, Tennessee. The shop had a long history, most notable in the 1970’s it was converted by Johnny Cash to be the spot where the “Saturday Night at Hickman County” guitar pulls took place on the “Little Stage”. Later Johnny sold it to Red Wortham who turned it into a recording studio. The structure was on the verge of collapse when Brian and Sally Oxley brought it. Within months the couple along with supporters including Johnny’s daughter Cindy Cash had resurrected it to look like an old time general store on the outside. Inside it is the Storytellers Museum which features Johnny Cash memorabilia along with other items of interest including rare 16th century Bibles and a page from the Gutenberg Bible

“The center of my universe” is what Cash called the Farm at Bon Aqua. This was the home where Johnny kicked off his boots to walk barefoot in the fields. A place to contemplate, read and write songs if inspired. The house was built before the Civil War by the prominent Weems family. The Farm reflects the history of its famous and wealthy owners. Some of the furniture in the house was Johnny’s. Guests can sit in Cash’s chair or look out windows at the views that brought peace to the Man in Black. Both the Storytellers Museum and the Farm at Bon Aqua are open to the public. 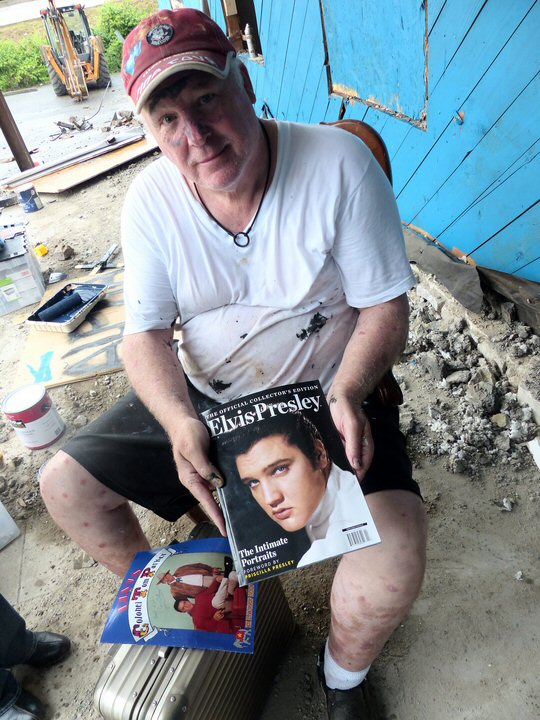 Musical archaeologist Brian Oxley is digging up history in Madison.

Since their Cash immersion Brian and Sally have put a lot of energy, money and time into the restoration of the properties becoming “anthropologists, archeologists and musicologists” in the process. So, when they heard that developers intended to build a car wash on the lot formerly belonging to Colonel Tom Parker – Elvis Presley’s larger than life manager – they formulated a plan to preserve what history was left in the stone structures. The pair obtained temporary rights to the exterior and interior of the Parker property which gave them the opportunity to break down walls, dig and discover the tons – and we mean tons of history – that still remained before it would all be destroyed.

Tom Parker purchased the property at 1215 Gallatin Pike in Madison in the 1950’s where he lived in one of the four buildings. Another was the home office of Elvis Enterprises. This is where fans prior to the Internet would send letters to the King. During the recovery efforts part of post-marked envelopes were discovered hiding in the cinder blocks. Think of what took place behind these walls – the phone system in the house was the one in which Ed Sullivan would have called to negotiate Elvis’ appearance on Ed’s popular TV show. In the early years of his career Presley would often stay with the Colonel so some of the razors found in the bathroom walls are likely to have been left by The King himself. Another of many discoveries was a Hank Snow poster along with a money clip – perhaps Parker’s.

Brian mentioned that much of the Elvis memorabilia such as awards, clothes and gold records that were in Parker’s house were taken to Graceland but the Oxleys with a dedicated crew have dismantled the buildings discovering a treasure trove of history and priceless memories. They have painstakingly taken rooms apart noting the order of things as their long range plans are to rebuild them somewhere in the world – perhaps Japan, the UK or the States. That decision might be left up to a fan vote later on down the line. Brian showed us a knotty pine panel and then a picture of the King and Colonel in front of it. The panels, equipment, shingles and even wires are some of the unique items the Oxleys have saved.

Brian – who never went to an Elvis concert – is a prolific author who has already published a limited, beautifully illustrated book about this project. In addition the Oxleys have a number of online videos that demonstrate Brian’s passion in his hunt for big and small treasures. We learned a bit about his dogged determination when in one video clip from late April he admits that he is out of time and needs to let go of the search. But, as it turned out, he secured even more time allowing him to keep at it until mid-May. Now, this historic property will morph into a car wash. Still, the Oxleys have certainly done what they could to literally take this house apart one piece at a time to preserve it for future generations. 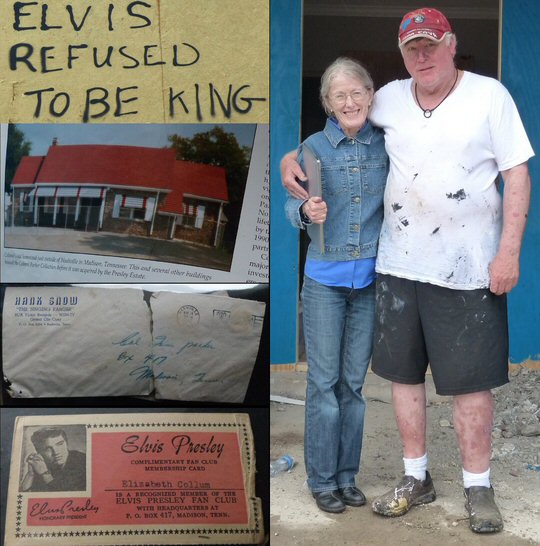 The building as it once looked; artifacts found on site; and, the Oxleys.

The Oxleys pointed out to us the fire-pit on the property where we could imagine the artist and manager sharing a meal. Brian also noted that a lot of the land was paved over he speculated that perhaps Tom had planned to open a museum of his own. For now the containers from Parker’s property will be hidden away on the Hideaway Farm as the couple formulates their next steps.

Meanwhile back at the Farm and the Storytellers Museum the Oxleys have future plans to open a café and store to make the three corners at Highway 46 an active and vital hub for visitors to Bon Aqua. Their aim is to create a popular tourist attraction but maintain the small town feel that so appealed to Cash. On many a Saturday nights, The Museum will be hosting concerts just like Johnny did. The Storytellers Museum is currently open Wednesday through Saturday but please check their website for up-to-date information and Saturday night show times. Also note that The Farm at Bon Aqua will be hosting its first annual Bluegrass Festival on July 01, 2017. 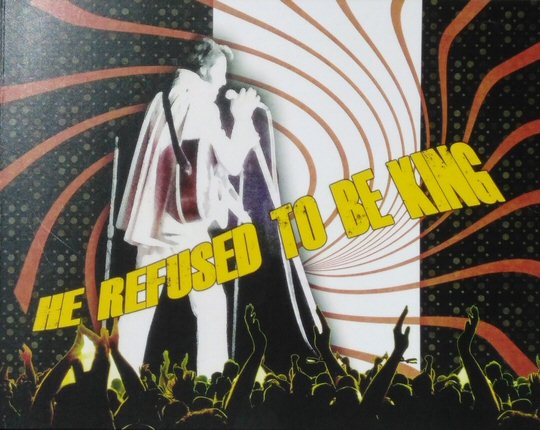 The first draft of the new book from Brian Oxley about this project is out.