Okay, I admit it. I was never that big of a wrestling fan. You know why – it seemed fake, was too scripted, so overly dramatic and always over the top. But I had friends who loved it. My college roommate would often reenact a Jimmy “The Superfly” Snuka leap off of his bed straight onto yours truly further alienating me from the entertainment value of the sport. However, attending the WWE SmackDown Live on August 2, 2016 at the Bridgestone Arena in Nashville, Tennessee might have finally tilted me toward fandom – or, at least provided me with extreme appreciation for the empire that Vince McMahon and Company have built over the past four decades.

Wrestling was the main event in Music City.

There’s no doubt that The Boss has built an amazing spectacle with the WWE. Nevermind the spectacular failure that was the short-lived but high profile foray into the gridiron in the form of the XFL. The Stamford, Connecticut-based company was looking for more stars to elevate to mythical status. Returning the focus to marketing the mayhem on the mat the WWE launched a 24/7 streaming network that includes past and present WWE shows, pay-per-views, and archives from the WWE Library. The network reached 1,000,000 subscribers in under one year of its launch making it what the WWE claims to be “the fastest-growing digital subscription service ever”.

So it was these literal giants of their industry who rolled into Music City to put their ample muscle on display as part of the WWE’s marquee weekly television show. Rabid fans dressed in costumed attire were woofing it up early and often as they rooted for the villains and heroes. Explosions set off in the well attended venue caught our attention as the festivities began. Followers of the WWE had hand-painted signs flying high for their favorites as the arena was transformed into a Romanesque field of battle for the night.

The demonic Kane got the night off to a fast start when he pinned a clearly overmatched opponent quickly with little or no effort as the ring turned crimson and flames shot high from all corners. More stars made their way to the ring with all the pompous pomp and circumstance that you would expect. Interspersed was a lot of boisterous chatter, wrestlers facing off in verbal sparring, all enhanced by large screen video presentations that kept the viewer abreast of the latest twists and turns in the soap opera that is SmackDown Live. 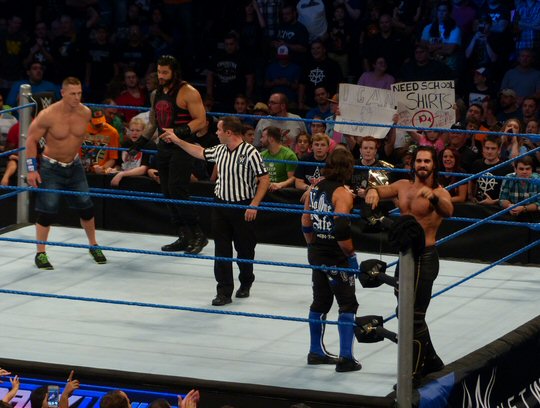 Scenes from SmackDown Live in Nashville in August 2016.

Soon, the current WWE World Champion Dean Ambrose entered the arena to let everyone know that his ascendancy to become bearer of the belt was no fluke and that he plans on staying on top. He invited a worthy yet insecure opponent named Dolph Ziggler to come on out to pump up fans for their upcoming big battle in Brooklyn later this summer. Ziggler surprised the crowd by agreeing to jeopardize his secure position as the #1 contender when taunted by the bearded Bray Wyatt into an unscheduled match later in the night.

More WWE stars were present in Nashville including the fan favorite Randy Orton supported by his band of Vipers. Longtime hero John Cena was inspiring during his smack talk with rival A.J. Styles who took umbrage with J.C.’s “never give up” attitude. This exchange underscored the fact that there is a deeper positive message that runs through the fabric of pro wrestling if you know where to look.

You couldn’t help but know where to look when the lovely Eva Marie better known as the Red Queen made her sexy entrance and she mounted the ropes to acknowledge the fans. This activity apparently caused too much stress because her bout with the Irish Lass Kicker Becky Lynch was canceled due to injury. But another pair of fierce females stepped up to fight as Carmella prepped to face off against Natalya. This fight, too, was scrubbed unfortunately denying the young girl fans in Nashville from getting a glimpse of their role models in action. 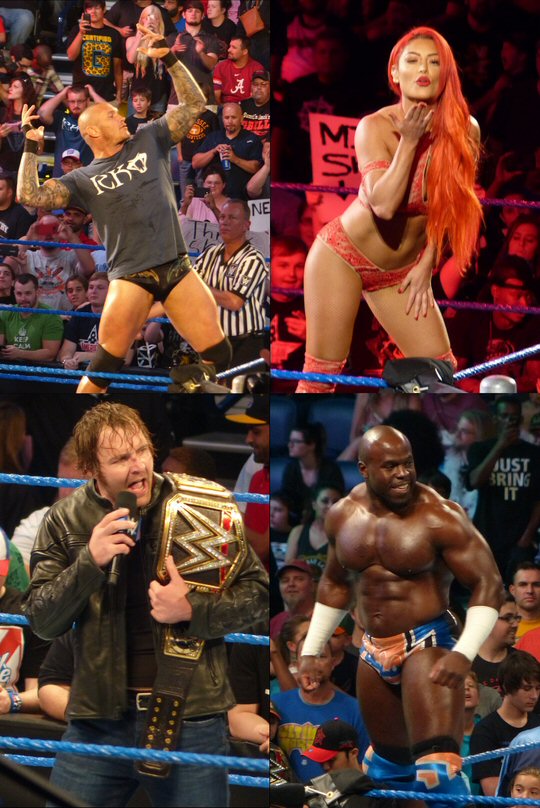 More scenes from SmackDown Live in Nashville in August 2016.

There was plenty of other action. Apollo Crews defeated Kalisto and Baron Corbin in an exciting battle to become the #1 contender for the WWE Intercontinental Championship. We also saw the debut of the anticipated American Alpha who defeated The Vaudevillains in the popular tag team format.

Even though the night featured more ads than the Grand Ole Opry that only served to underscore the prowess and the media branding power that the WWE has obtained through the years. They have a firm grip on the imagination of their fans. Many wrestling stars like The Rock have become crossover giants of Hollywood. The large screens touted the variety of proprietary programming on the WWE Network, hot wrestling video games, upcoming movies and even a new DVD that features The Flintstones proving that the WWE is a rock solid provider of bedrock family entertainment that is clearly not stuck in the stone age.

Fans who didn’t get enough of wrestling mania will be pleased to know the WWE will return to Music City as they announced the unwrapping of their Holiday Tour during the night’s event. The best superstars in sports entertainment including John Cena, WWE World Champion Dean Ambrose, Bray Wyatt, “The Phenomenal One” AJ Styles, Alberto Del Rio and many more will return to the Bridgestone Arena on December 28, 2016 to do it all over again.

More scenes from SmackDown Live in Nashville in August 2016.