It doesn’t seem that long ago when I lived in New Jersey and rooted for – gasp – the New Jersey Devils. In 1995 they followed up the long-awaited Stanley Cup win by the New York Rangers with a championship run of their own to become the demonic darlings of the Tri-State region. Then, the rumors emerged fast and furious that the team would be packing up and heading south to Nashville to became the main tenants in that city’s glorious new arena.

The Predators take to the ice once more in Smashville.

Devils fans were disgruntled by this news and soon began to gather in protest and held up mean-spirited signs at their home games with slogans such as “Nashville Has Enough People Without Teeth”. All this angst was in vain however because the New Jersey NHL franchise was just going through the motions of a re-negotiation and the ultimately stayed put in the Garden State. Still, Music City would have the last laugh.

Three shorts years later Tennessee received an expansion team in the National Hockey League and the Nashville Predators were born when they began play at the beautiful Bridgestone Arena on Broadway. The team has gone on to become the crown jewel of the push to the south with a rabid fan base and a winning tradition securely in place as they head toward a twentieth anniversary season in 2018.

We attended our second Predators game on February 21, 2017 at the award-winning Bridgestone Arena as the team took on the hot Calgary Flames. This place has it all from Nashville-specific cuisine such as hot chicken and the fine fare of Puckett’s Grocery to large photographs of the great concerts the venue has hosted. There are three levels and luxury boxes that are all buzzing with excitement as the game time nears. It’s easy to see why the building recently ranked as the fifth best arena in the United States. There’s not many better places to watch hockey or see a concert which is saying a lot for this mid-sized market in Mid-Tenn. 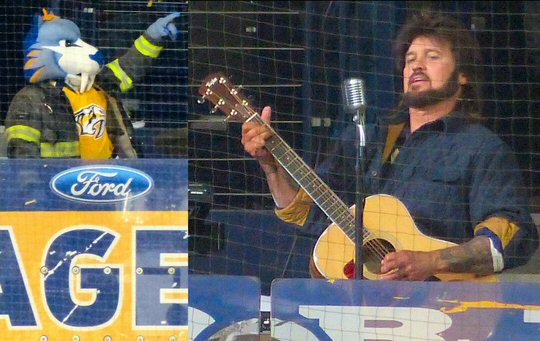 Even Gnash couldn’t douse the Flames; Billy Ray Cyrus is Still The King.

The Predators fans are a constant presence in the city as 41 times a year a sea of yellow and blue converges from all sides on the UFO-shaped home of their ice-hockey heroes. There’s no mistaking when the Preds are in town and this mass of fervent followers has been a major economic boost to the restaurants and bars in this ever-growing metropolis.

On this evening the franchise enacted another one of their “Guaranteed Winner” nights where all attendees are promised a prize via a scratch off ticket that they received walking in the door. The game time festivities also underscored just how entrenched the Predators have become in the region with local sponsorships and co-branding rising to the forefront as car-dealerships, lighting stores, the Nashville Sounds and nearby colleges all got in on the action during stoppage time and intermission activities.

After floundering a bit in the first period the game turned thrilling in the second period as the Preds mounted a comeback seemingly inspired by a live performance from Country Music icon Billy Ray Cyrus. They overcame a 4-1 deficit with the help of a hat-trick from forward Filip Forsberg to take a 5-4 lead into the final minutes of the game before Calgary tied it up to send the match into a 3 on 3 overtime period where the Preds would not prevail ultimately falling 6-5 to their Canadian rivals. But, fans were still the big winners as they came away with free food courtesy of Wendy’s and McDonalds and thousands of other prizes, too. And, as sure as there’s music streaming from the honkey-tonks on the banks of the Cumberland, it won’t be long before fans are seen flocking back once again to the coolest spot in town hoping for a victory. 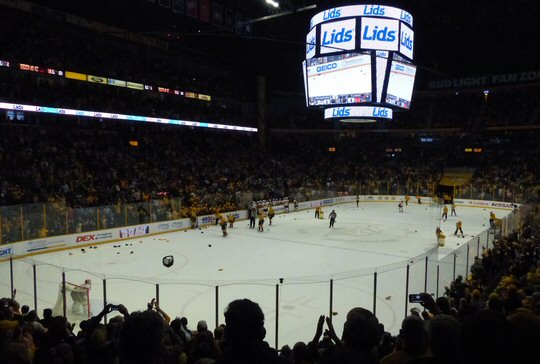 A rare hat-trick couldn’t do the trick in a 6-5 OT defeat.

Related Links: For more information on the NASHVILLE PREDATORS and the other organizations mentioned please visit the following links — Nashville Predators | Bridgestone Arena | Still The King