While the eyes of the world are literally on Russia and the compelling stories of the 32 teams battling for the World Cup – fans in Nashville, Tennessee are watching their home team grab a foothold in a crowded sports market even as they prepare to take their place in the continent’s top football circuit in a few short years. On Saturday, July 7, 2018 an impressive 18,228 fervent footie followers had the opportunity to watch their Soccer Club take on a team who will eventually be their rival in the MLS.

There are many ways to get your kicks at a Nashville SC match.

For just the second time this season the new soccer sensation in town played a home game in the large Nissan Stadium that is the home turf of the NFL’s Tennessee Titans. The weather turned nice just in time for the first ever regular season match between the home club and the visiting squad known as FC Cincinnati. There was a palpable festive atmosphere and noticeable patch of yellow in blue behind the south side goal. An enthusiastic group of supporters called the Nashville Roadies entered the section and took up temporary residence to root on their boys who hail from points all over the globe proving that soccer is the one true dominant planetary sport.

The Cincy contingent are currently competitors in the second-tier USL and they too had a nice showing of fans who traveled to Music City in search of a soccer party. The United Soccer League is a Division II Professional League sanctioned by the United States Soccer Federation. The organization now fields 33 teams and each franchise serves to grow the sport regionally with potential to move up. Consider that Cincinnati now in their second year just received their approval to join MLS and are set to begin play there next season. They’ve built a solid following in a short period of time and have set a good example for Nashville SC to follow.

This game had 90-minutes of non-stop action but no goals were tallied.

To use a soccer metaphor, sometimes you have to go backwards to go forwards. On the field the two teams sent the ball back and forth all game long, trading possessions with a lot of chances but nary a goal to be found on this night’s 0-0 draw. In the front office, both Nashville SC and FC Cincinnati are poised to step up to the big league via a very American form of advancement – via the checkbook. Whereas most other leagues around the world will send squads up and down the professional pyramids via promotion and regulation that is based on standings – there is no such system in place in the U.S.A.

So, what’s next for Nashville SC? To apply another soccer concept they need to make some space. They’ve already determined that their next new home in town will be just south of the city in a soon to come Nashville Fairgrounds Stadium that will be a soccer-specific facility with room for nearly 30,000 fans. There’s no doubt that they are also gaining room in the hearts and minds of the hometown faithful. On Saturday, Saturday we observed ample amounts of team apparel and memorabilia spread throughout the coliseum’s packed lower bowl. 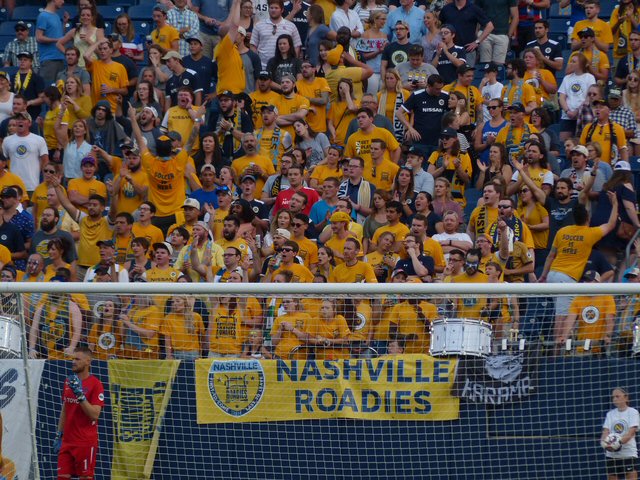 The enthusiastic Nashville Roadies are the leading group of supporters for the nascent hometown squad.

Nashville SC also hosted a post-game fireworks display that offered an impressive array with a large majority of the attendees sticking around to observe the patriotic pyrotechnics during the busy July Fourth week in Mid-Tenn. The club is doing a good job getting the word out and these extras really help to seal the long-term loyalty between fan and franchise. Still, red-blooded Americans are known to prefer sports that feature scoring so it was disappointing to see that the fireworks from the feet of the footballers – while explosive – were all for naught.

But, it wasn’t for a lack of trying. Nashville’s mid-fielder #10 Lebo Moloto was named “Man of the Match” on the strength of his consistent attack on net. The South Afrikaner’s many shots throughout both halves elicited audible gasps from the stands but no goals. Still, he won accolades from those who were watching as the USL season turns it sites to the fall and the playoffs – which both teams are vying for. One thing remains certain, though. Nashville and Cincinnati will be face off on the pitch again before long as rivals and mid-America soccer pioneers. 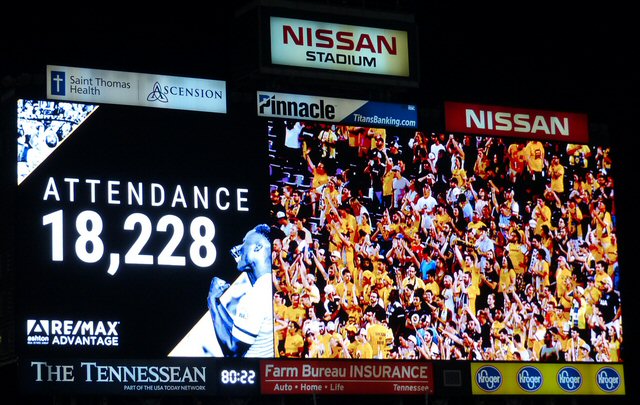 Another good crowd greets and cheers for Nashville SC in Music City.

Related Links: For more information on NASHVILLE SC and the other organizations mentioned please visit the following links — Nashville SC | Nashville SC Plants Their Feet and Flag in Music City