On Sunday, November 27, 2016 Cirque Musica Holiday Spectacular dazzled fans of all ages at the Bridgestone Arena in Nashville, Tennessee. The show featured the Nashville Recording Orchestra paired with the creative cast of Cirque Musica presenting skills of poise and wonder to the most popular songs of the Christmas season. The Spectacular also featured performers who come from 6th, 7th and even 8th generations of circus families.

Stephen Cook, the creator and producer of Cirque Musica, started his career in the circus world before moving over to symphonies. He founded TCG Entertainment with the idea of bringing the two disciplines together to craft one unique live show. The first Cirque Musica tour combined circus performers with famous classical works by Tchaikovsky and Beethoven. It was only a matter of time before Stephen conceived a vision for a Christmas show. After a successful debut year, the Cirque Musica Holiday Spectacular has expanded greatly. In 2016, there are two troupes touring the program, allowing it to play over 25 North American cities which this year included Music City. Cook is aiming to have three units on the road for 2017. The symphony meets the circus with athletic acrobatic acoustics is also an effort to expose classical music to non-classical audiences.

Christmas music was piped in at the Bridgestone where a full orchestra could be seen though a sheer veil. The music transitioned to live as the Orchestra presented a magical medley of Christmas classics including “The First Noel”, “Silent Night”, “Jingle Bells” and more. The veil came down and dancers in pretty holiday costumes moved in sync with the songs thus the circus part of the show started. One of the first performers balanced things on his face. The objects got more unwieldly as he progressed culminating with a larger ladder that he had just used to place a star on a tall Christmas tree. 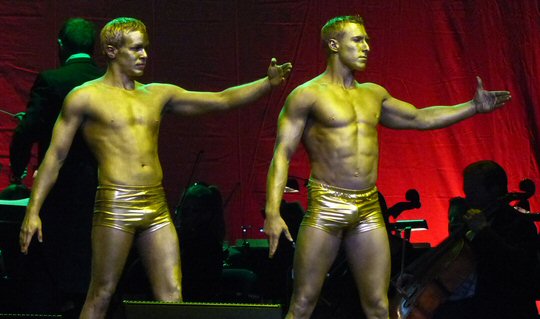 Next, two muscular, golden men performed feats of flexibility and strength in smooth steady moves. It was hard to comprehend the level of balance, polish and power required by these artists. More music as a man came circling out in a big hoop. His spins got tougher with tilts that leaned closer to the floor. The ringmaster/host of the evening was a stellar singer who presented a heavenly version of “O Holy Night”. Another example of grace and skill was the two women in sparkling white costumes who shared a trapeze as they moved and intertwined themselves in coordination to the classical music.

After a short intermission dramatic music accompanied three ladies on the rings who amazed us with their twists and turns. Two men armed with three dimensional squares that were lit up were engaging and entertaining as was the hula hoop girl and the gymnasts. The strong men returned for “Silent Night” astonishing us with more muscular stunts. Last was what is considered one of the most dangerous circus acts – The Russian Bar. Two bulky men held each end of an apparatus as they controlled it along with the movements of the flyer who bounces on the thin trampoline bar before she goes catapulting and flipping into the air having the dexterity to land back on the bouncing beam. We held our breaths as we watched the skilled flyer soar and nail every move. The Russian Bar ended a memorable evening on a high note.

Cirque Musica Holiday Spectacular attracted plenty of families to the Bridgestone on Sunday night and it is likely to become an annual tradition for many. Please check your local venues for this and other TCG Entertainment events as they combine the beauty of classical music with the boldness of the circus. The Bridgestone Arena in the heart of Downtown Nashville continues to host a wide array of shows such as Cirque Musica Holiday Spectacular. Upcoming events include Kelly Clarkson, The WWE, Widespread Panic and Hockey with the Predators. 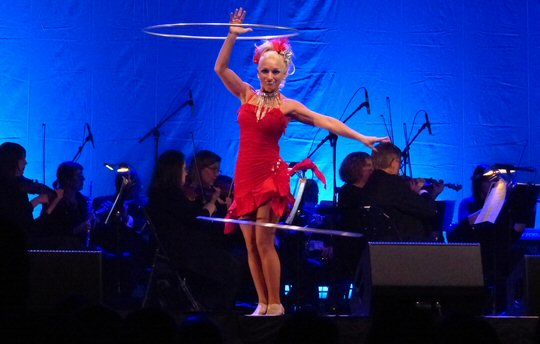