Steven Curtis Chapman has won more awards than any other Christian artist. He has also enjoyed crossover success. One of Steven’s more recent records Worship and Believe released in 2016 was considered his first worship album. 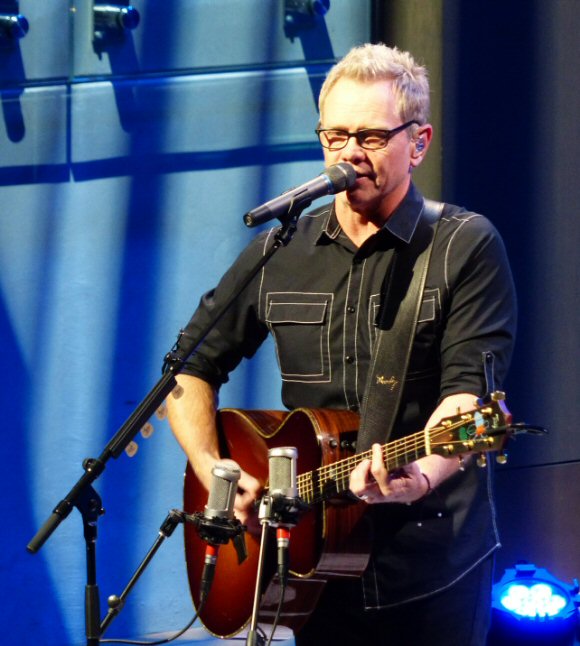 “These songs have come out of my own journey, particularly of the last seven years of learning the life-giving power of hearing my own voice and the voice of other believers around me declare what is most true and most real,” he says. “What God says is true – even when pain, doubt, grief and confusion are very real as well. There’s an incredible power in agreeing with each other, and especially with God.”

August through November of 2018, Chapman has embarked on the SCC Solo Tour to share his songs and stories in more intimate surroundings which included a stop at the CMA Theater in Nashville, Tennessee on November 09, 2018. As a tie into the record the theme of the evening was remember to remember. On Friday night through his music paired with videos Steven recalled his past as the path to the present. For those who want to dig deeper into SCC’s personal account there is his book Between Heaven & The Real World (2017).

A grand piano filled much of the CMA stage but for most of the night Steven presented his career spanning set on acoustic guitar. Chapman took us back to his hometown of Paducah, Kentucky. Steven’s father was a musician and his mother was the one who took the family to church on Sundays, thus from an early age the core foundations of Steven’s life were established. Chapman was also in a duo with his older brother Herb. The two often performed locally. The next important chapters in Steven’s life began with his wife Mary Beth and persuing music.

“We had our plans but God has His,” reflected Steven. He recollected that as newlyweds they were intending on starting a family in a few years but their first child Emily arrived sooner and more blessings followed. It was Emily who wrote another important chapter in their lives. Mary Beth and her daughter had gone on a mission trip to Hatti. The astute pre-teen observed many kids without families and wanted to do something about it. Not only did the Chapmans adopt a number of children they founded Show Hope. Steven talked at length about this organization before intermission.

Show Hope states that “we believe that each child has the inherent, God-given right to be a part of a loving, caring family. Our work is dedicated to restoring hope to millions of children living as orphans by breaking down barriers between waiting children and loving families. For us, a holistic approach in regard to the spectrum of care needed is crucial, ensuring that each stage of development and need is addressed.” This is accomplished through adoption grants, care centers, post & pre adoption support and student initiatives.

During the second half of the concert Mary Beth joined Steven for a musical rap. Chapman also took requests. With such an extensive catalog, he was not able to remember some of the tunes folks asked for so he joked that they were playing “stump Steven” however Chapman aptly performed a number of fan favorites including “The Great Adventure”, a moving “Cinderella” and the closer “Dive”. SCC Solo Tour was a more low key affair then a band set would be but it was a great opportunity to get to know the artist on a deeper level.

The CMA Theater is a premier venue in the heart of Music City that showcases a broad range of artists such as Steven Curtis Chapman. Upcoming events at the CMA include Rufus Wainwright, Brett Eldredge, Arlo Guthrie, Travis Tritt and Beth Hart.