It was a bit early for a mid-summer heat wave as the temperature gauges hit 95 degrees in Music City. But, Rock and Roll Hall of Famer Nils Lofgren remained cool, confident and composed as he played the second of a two-night stand at the City Winery in Nashville, Tennessee on May 25, 2019.

Nils Lofgren and the Blue With Lou band in Nashville.

Lofgren was on a month-long jaunt through many of his hot spots in support of his new album Blue With Louthat was written in part as a collaborative effort with the late great Lou Reed. Nils announced from the stage that it was the first time in decades that he was on the road with the band (Kevin McCormick-drums, Andy Newmark-bass, Cindy Mizelle-vox & Tommy Lofgren-guitars/keys) that actually recorded the record with him.

Lofgren and Reed’s friendship dates back to 1978 when the current E Streeter was working on his fifth studio album. Lofgren shared 13 demos with the Velvet Underground founder. “I said to him, ‘I have all this music that I felt strongly about, but I didn’t like the lyrics,'” Nils told Rolling Stone. “Lou said, ‘I’m the exact opposite. I write lyrics all the time that I think are good, but the music takes a bit more elbow grease.'”

Of those tapes, Reed utilized three for his 1979 solo effort Bells and Lofgren would record five of the others over the years. Nils recently returned to the remaining five tunes that are now featured on Blue With Louwhose title track is a tribute to Reed. Also, on the platter is “Dear Heartbreaker” a nod to another iconic musician – Tom Petty. New songs from the album such as “Give”, “Attitude City”, “Too Blue to Play” and “Rock or Not” were effective and engaging in a live setting.

The Nashville show opened with the slow burn of “Daddy Dream”. “Give” combined a catchy groove with compelling commentary that flowed into a one-time rarity “Across the Tracks”, which has found its way back into Lofgren’s sets in recent years. Later, “Big Tears Fall” sung by Cindy Mizelle hit one of many high marks of the set along with Lofgren’s sizzling solos that showcased the agile artist spinning as he played his lush leads.

“Great,” declared Nils who joked that he needed to tell a story after Cindy’s potent performance. Lofgren shared that at an early age he played the accordion before the Beatles and rock music inspired him to pick up a guitar. He dropped out of high school and somehow managed to meet Neil Young which led to Nils performing on Young’s After The Gold Rush album. Lofgren revealed that his years of accordion paid off as Neil liked Nils’ polka inspired piano arrangement for “Southern Man”.

Lofgren played keys on “Irish Angel” and “Goin’ Back” (Carole King cover). Other peaks of this career spanning set included “Like Rain” (Grin song), a nuanced “No Mercy” and a dynamic “I Came To Dance”. Nils concluded the second of two nights in Nashville in style by playing his Boss’s hit – “Because The Night” followed by his own “Shine Silently”.

If rumors swirling on the web are true Lofgren will be back recording a new E Street Band album with Bruce Springsteen with a 2020 world tour to follow. In Nashville, Nils proved that he is a capable frontman and a shining star in his own right and his blistering licks and expressive vocals also revealed that he really isn’t the silent type – and we’re all the better for that.

Nils played a sizzler at the City Winery and he is on a hot streak. Lofgren recently joined Neil Young’s Crazy Horse as a second guitarist, vocalists and permanent replacement for the now retired Frank “Poncho” Sampedro. The famous incendiary quartet has just wrapped the new platter that Young has called the Horse’s most eclectic effort to date.

The City Winery in Nashville continues to host a full-body of artists such as Nils Lofgren. In addition to great music patrons can enjoy fine food and drinks pre-show. Upcoming shows at the venue included Anthony Gomes, Matthew Perryman, Roots Radio, Howie Day and other guitar greats Paul Gilbert and Al Di Meola. 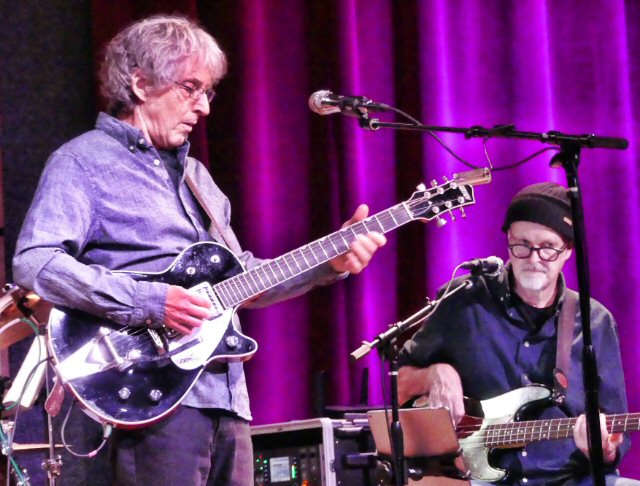 It’s a family band when Tommy Lofgren is in the house.