On November 21, 2017 there was a spirited meet-up at the Schermerhorn Symphony Center in Nashville, Tennessee when guitar greats John McLaughlin and Jimmy Herring performed at one of the most elegant venues in Music City. Nashville was one of 23 cities that were part of The Meeting of the Spirits tour taking place the fall of 2017 where each guitarist played a set of instrumental music before merging their talented teams for a third set packed with material from the historic Mahavishnu Orchestra catalogue.

Englishman John McLaughlin also known as Mahavishnu John McLaughlin is a bandleader, composer and guitarist. His music includes many genres of jazz which he melded with elements of rock, Indian classical music, Western classical music, flamenco and blues. In the early 1960’s, he performed in a bunch of British bands before moving to American where he connected with Tony William’s group Lifetime. Later, John joined electric jazz-fusion artist Miles Davis contributing to Miles’ pivotal Bitches Brew album. In the 1970’s, McLaughlin’s electric band the Mahavishnu Orchestra (MO) crafted a complex and technically virtuosic style of music that fused electric jazz and rock with Indian influences. MO were pioneers in fusion thus inspiring and influencing many in their wake.

McLaughlin is also a Grammy winner and he has been given multiple “Guitarist of the Year” and “Best Jazz Guitarist” awards from magazines such as Down Beat and Guitar Player based on reader polls. In 2003, he was ranked 49th in Rolling Stone magazine’s list of the “100 Greatest Guitarists of All Time”. In 2009, Down Beat Magazine included McLaughlin in its unranked list of “75 Great Guitarists”, in the “Modern Jazz Maestros” category. In 2012, Guitar World magazine ranked him #63 on its top 100 list. In 2010, guitarist Jeff Beck called him “the best guitarist alive” and McLaughlin was also referred to as the best guitarist alive by Pat Metheny.

American Jimmy Herring is well-respected for his work in a number of groups including The Aquarium Rescue Unit, Project Z, and Jazz is Dead. In addition to playing with everyone from The Allman Brothers Band, to The Dead, to Phil Lesh and Friends, Jimmy has left an indelible mark on improvised music. Herring is currently the lead guitarist for the popular Widespread Panic.

Jimmy considers John McLaughlin both an inspiration and supporter, thus it was truly a The Meeting of the Spirits at the Symphony. The stage was packed with gear as one side was for Jimmy’s band the Invisible Whip and the other for the 4th Dimension who were backing John. Herring opened his show with a Miles Davis cover in a tantalizing tribute to “John McLaughlin” that flowed into an animated take on “Les Brers in A Minor” (Allman Brothers) where the Whip excelled in exploratory solos. Even though Jimmy has spent much of his career playing in jam bands, since 2008 he has released his own jazz fusion albums so the remainder of Herring’s set was a magical blend of funk, jam and jazz all packed with fluid fret work and more impressive solos from the band. 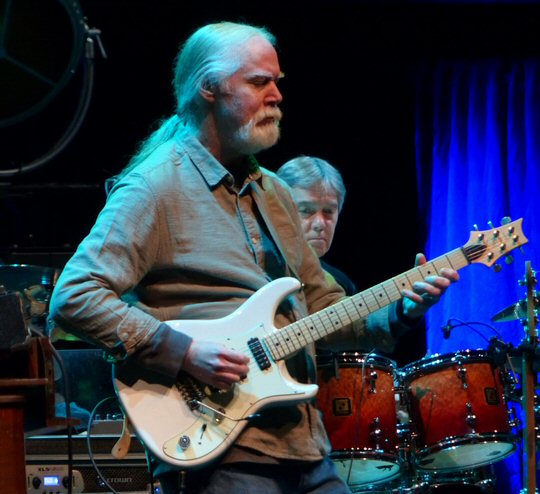 After a short break John McLaughlin and the 4th Dimension were warmly welcomed by the attentive audience. McLaughlin in turn greeted Nashville before getting down to business with a jazzy and rocking “Here Come The Jiis”. From there the colorful complex compositions kept coming. As is the tradition in jazz, John the bandleader often stepped to the side allowing his talented team to strut their stuff, and strut they did. Back at the helm John demonstrated with grace that he is well deserving of all the “Greatest Guitarist” awards he has received. The highpoint of the evening was the converging of the two groups presenting the ground-breaking music of the genre-defying Mahavishnu Orchestra. They explored songs from such seminal records as Birds of Fire, Between Nothingness and more.

Reflecting on the tour John shares “the music of Mahavishnu is part of my personal and musical history, and as such it is inseparable from me,” McLaughlin said in the release. “To return to these pieces with the experience I’ve had for the past 45 years, since the majority of those pieces were played all those years ago, is very exciting.” Herring adds that “John’s influence on me is far-reaching. When first hearing him, I was struck by the raw emotion and technical prowess he has. If you listen to John long enough, the layers of all the things that make him unique will reveal themselves. Inner Mounting Flame changed my life and the way I heard music. By the time I heard it in 1980, John had long since moved on and recreated himself, as he has done many times throughout his career. It is an honor and a privilege to do this tour with John and the 4th Dimension.” For fans it was a privilege to experience these spirited artists pay their respects to the past in the present day.

The Schermerhorn Symphony Center located in the heart of Music City is one of the finest sounding venues in Nashville. Their focus is classical music but the Nashville Symphony also hosts a wide range of artists such as John McLaughlin with Jimmy Herring. Upcoming events include Fantasia, Cirque de la Symphonie, Jennifer Nettles, CeCe Winans and A Johnnyswim Christmas.

Related Links: For more information on THE MEETING OF THE SPIRITS and the other organizations mentioned please visit the following links — John McLaughlin | Jimmy Herring | Nashville Symphony